The Superstitious Minds of Pirates

Song of the Day: Cue the Twilight Zone theme music.

In my Romancing the Pirates series, I mention superstitions often. Superstitions fascinate me. The oddity of these beliefs, how they originated, and the stories linked to them. And because superstition was so prevalent with sailors and pirates, naturally I incorporated bits of maritime myths in my books.

Like all sea dogs worth their salt, most of my characters are highly superstitious. One recurring belief tale after tale was that women on board were bad luck. By the antics and trouble that befall the crew time and again, I tend to agree.

In A Kiss in the Wind (shameless plug: release date March 26th!), there are several events surrounding superstition that has the crew all skittish and affright. One such event involves seagulls flying overhead while our fearless pirate captain comes upon a ghost ship. Seagulls and albatross were believed to carry the souls of dead sailors. Killing one of these birds was considered very bad luck. Stand down animal lovers, no birds were harmed in the making of Kiss. But these birds did fly above the masts in groups of three—a sure omen of death. 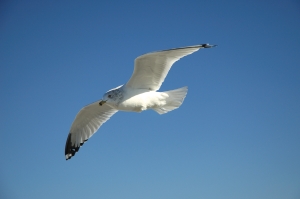 Some of the superstitions I slipped into the story but said nothing of the beliefs surrounding them. Flowers are considered unlucky to have on board as they could be used for a funeral wreath. Therefore, many sailors believed flowers on a ship also meant someone would die on the voyage. In Blood and Treasure, I deliberately used flowers as a representation and foreshadowing symbolism.

There are loads more mariner superstitions. Can you name another?

This entry was posted on Wednesday, March 14th, 2012 at 6:15 am and is filed under Authors, Jennifer, Research, Writing. You can follow any responses to this entry through the RSS 2.0 feed. You can leave a response, or trackback from your own site.

12 Responses to The Superstitious Minds of Pirates