Song of the Day: Radioactive by Imagine Dragons 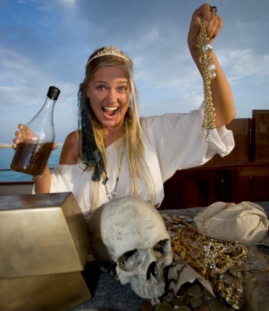 Me, on any given day.

This may come to a surprise to you, but I’m not a real Caribbean pirate. Not in the sense that I have actually learned to sail 16th century wooden ship, or have sacked poor, unsuspecting, seaside port towns. Yet. But I have sailed on a wooden ship and I have done extensive research on pirates.

Fact matters. So they say. As authors, we really need to get our facts straight, even for the minutest details. No skimping. Some readers zero in on when you do. Even if you don’t realize it.

Case in point, I recently received an email calling me out on the misuse of shipboard terms. Don’t get me wrong, the gentleman meant no harm and no criticism. He merely wanted me to know in case I was not aware—which I truly appreciated.

And since I will be continuing my series with a few more books, I’d be remiss not taking his suggestion seriously. And stupid. For more than one reason.

Authors, no matter where they are in their writing careers, should never stop learning. Whether it’s craft, industry, new genres, research, publishing, there’s lots of fluid information out there. No one person can claim to know it all. Not even a pirate diva.

My misuse, or lack of proper vocabulary, prompted this reader to reach out to me. It bothered him enough to go to the trouble. That’s a point of contact. Somewhere, he received my book. He read my book. He visited my website. I am now an author he knows.

He’s likely not the only one to notice my nomenclature. On the flip side, because of the cordial way he contacted me, it allowed me to respond and hopefully connect with the reader in a positive way. 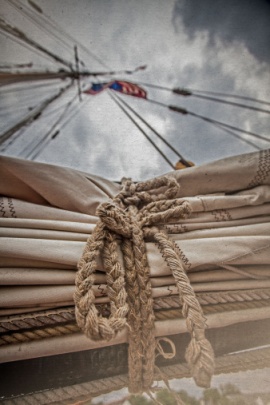 Quick! What kind of knot is this?

Long before I even played with the notion of writing, I sent an email to an author I adored, asking about her pen name and the meaning behind it. I was pregnant with my  first child and loved the name Kinley. I wanted to know more about the name. Imagine how blown away I was when she cheerfully responded. I’d already enjoyed her books, but by not simply overlooking or ignoring my email,  and taking a moment to indulge me, she gained a fan for life. You guys know her better as Sherrilyn Kenyon.

Another reason I gladly accepted his suggestion is that this man, without saying it, is far more knowledgeable with shipboard terminology than myself. No, he is not a pirate. But his signature indicated he served in the Navy…as a captain. Now, I’m not saying I gained a fan for life. But it is my hope that the man regarded my response favorably.

Authors should strive to get the facts right, no doubt. However, sometimes creative license comes into play. In my case, though the captain enlightened me with a shipboard term I was not previously keen on, another I was completely in the know. Readers don’t always know the meanings behind specialized, time specific, genre distinct, or characteristically slang vocabulary. Sometimes, writers need to interchange words and phrases with more common terms. For example, I use ropes and ratlines to describe ship rigging because my target audience might not know what clew lines or halyards are, or where to find them. I don’t want to slow the readers pace by causing them to pause. I want them to engaged.

We can research until our eyes pop out of our skulls, but there will always be something we have not learned or have overlooked.

How about you? Has someone ever caught you? Have you been humbly corrected? Or perhaps you were in the right? Maybe you were the one who caught a misstep. Let me hear from you.

This entry was posted on Wednesday, June 5th, 2013 at 8:20 am and is filed under Craft, Jennifer, Research, Writing. You can follow any responses to this entry through the RSS 2.0 feed. You can leave a response, or trackback from your own site.

8 Responses to Getting schooled