The word dystopian comes from the ancient greek with δυσ-, “bad”, and τόπος, “place.” Alternatively it can also be called cacotopia, or anti-utopia. The word dystopia represents a counterpart of utopia.

Many dystopias described in fictional works present a utopian society, where good-life seems to have been achieved, but suffering by at least one fatal issue. Whereas utopian societies are founded on aspiring to the general well-being, a dystopian society’s dreams of improvement are overshadowed by a repression of any sort and origin, at times even one benevolent repression.

These kind of society appear particularly in stories staged on a speculative and visionary future. Dystopias are often characterized by dehumanization, totalitarian rules, ecological and environmental disasters—post-apocalypse scenery, like in my work “The Daimones Trilogy”—or other events associated with a cataclysmic decline in the society fabric.

A famous dystopian novel is Fahrenheit 451, where the state burns all books out of fear of what they may incite in the individuals, and the more recent The Hunger Games, where a government holds control of its people by maintaining a constant state of fear through annual fight to the death competitions, the Hunger Games, where two young members of the various districts the world is divided in—after a global war that brought the planet on the bring of annihilation—are selected as ‘tribute’.

Dystopias have taken the form of a multitude kind of speculations and create very compelling stories that touch on issues of our own society: corruption, poverty, violence, pollution, political repressions. They offer their writers lots of freedom and inventive. Even if placed in the future, technology may, or may not be more advanced than in the present. In some cases, humanity has been brought to face a total collapse of the world as we know it and the fights for survival set in.

Some dystopian fictions emphasize the pressure to conform to a flattened society, as a requirement not to excel. In these fictions, the society is ruthlessly egalitarian, in which ability and accomplishment, or even competence, are suppressed or stigmatized as forms of inequality. Again, in Ray Bradbury’s Fahrenheit 451, the dystopia represses the intellectuals with a particular brutality and subverts pillars of our society like the concept of family, a clear case of dehumanization dystopian organizations.

Both the principles of utopian and dystopian societies can be idealistic, with the goal of attaining positive stability for its members, but on dystopian fictions the foundations have such defects that ultimately result in oppressive consequences for the inhabitants of the planet. The oppression and repression can be subtle and the perception of a utopian society lingers instead, at least for a certain duration of the story, until a Hero becomes aware of the flaws and decides, against all odds, to intervene. Some fine examples come from such films and stories as Fritz Lang’s Metropolis and Brazil.

In dystopia, characters are at the mercy of the controlled society even if, at epidemic level, they might have the impression to live the good life; people enjoy much higher material living-standards in exchange for the loss of other qualities in their lives, such as independent thought and emotional depth. Humanity lives in a glorious state of comfort, but has given up what gives life its meaning.

The fictional society construction often has a backstory of a disaster, a war, a critical global climatic change, or an encounter of the third type, introduced early in the narrative and that create the stage for the story evolution. The historic events triggered the shift from previous systems of society organization and social norms to a changed society and new, often disturbing, social norms.

Unlike other fictions where an improbable, outcast main character evolves through the typical Arc of the Hero, often dystopias feature a prominent personality of the new society as the protagonist who senses, sometimes intuitively, that something terribly wrong is going on, despite the ‘utopian’ outlook. The hero’s point of view clashes with the others’ perception, and reveals to the readers that concepts of utopia and dystopia are tied to each other and the only difference between them lies on a matter of opinion. The hero attempts to either change the system or bring it down.

The story is often—but not always—unresolved even if the hero manages to escape or destroy the dystopia. That is the individual who are unsatisfied, and rebel, ultimately fail to change anything. Dystopian works may convey a sense of hopelessness in contrasts with much fiction of the future, in which a hero succeeds in resolving conflicts or otherwise changes things for the better.

All we said about dystopian, and its duality with utopian fictions and visioned societies, can also be told about my work in progress, “The Daimones Trilogy”.

Book one, “Daimones”, is released in both ebook and paperback, and the volume 2, “Once Humans” will hit the virtual and real shelves by the end of May of this year.

The trilogy describes a post-apocalypse world whose dystopian roots are million years old. Ancient aliens, a galactic struggle, the control of unique resources, meld to dictate the fate of the humankind.

“Daimones” places a few survivors in a world having experienced a planetary culling of humankind, one with no immediate or apparent cause. The Apocalypse has arrived yet the ‘why’ and ‘how’ remain unknown in a frustrating and fearful reality for Dan Amenta and his family.

Dan and his family awake one day in a world where everyone is dead but no evidence points to a cause. Initial searches for survivors yield nothing and, in panic, the family turns their house into a stronghold. Eventually, they find Laura, a survivor who manages to win their hearts…and leads Dan to temptation. Laura reveals her panicking encounter with strange entities which Dan recognizes in his childhood hallucinations. He forces himself to find and confront them: An older power controls the fate of men.

The story, on purpose, starts with the confusing life–and manifest lack of information–of characters that, as with the vast majority of us, live their life focusing on a very little world around themselves. Then something happens, and the “heros” arch starts.

The novel describes what our world is: we focus on money, we are not looking at what happens around us, we already live in a spiritual apocalypse.  Vol.2, “Once Humans” has been published on July 2013.

The trilogy will explore the apocalypse from the physical death of humankind, the rebirth of the society, dystopian or utopian, and a larger conflict tensions with the second and third volumes.

Our real life world though tells us we have a spiritual death apocalypse already in place. 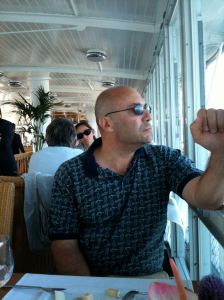 I’m Italian, or should I say, Sicilian. Palermo is my home town and I left it in 1986. I now have lived more years abroad than in Italy. Needless to say, I have changed in many and different way than my old friends there.

I lived in Switzerland, France, and the United States. For work, I used to travel some 500,000 air miles a year. I am a scientist as a background, having spent over 17 years in fundamental research. Most of my writing are academic stuff. I worked for many years at CERN, near Geneva—an international lab for particle physics research—then in the US at the Lawrence Berkeley National Lab. In 1995 I moved to the private sector, worked with Apple Inc., and then for the World Economic Forum.

Some say I have acquired a multi-faceted personality.

This entry was posted on Friday, August 30th, 2013 at 6:15 am and is filed under Guest, Jennifer, Research, Writing. You can follow any responses to this entry through the RSS 2.0 feed. You can leave a response, or trackback from your own site.