Mutiny of the Heart Release Party – Romancing the Pirate fun!

And just like any good party, we’re celebrating with fun, games, prizes and a pinata! Well, not a pinata, but there’ll be lots of virtual confetti. 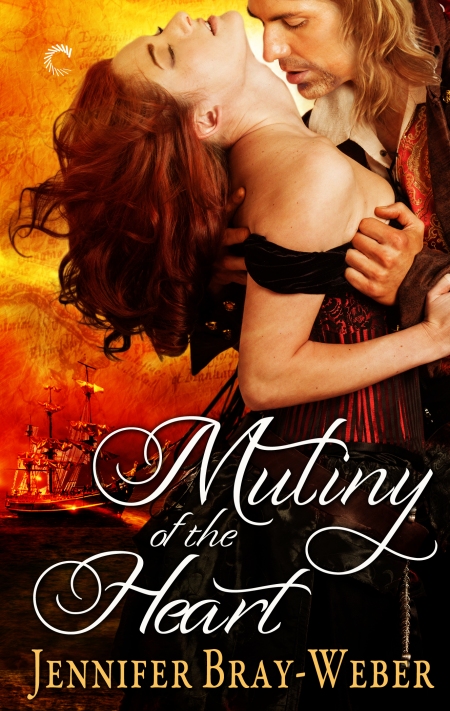 So what’s the book about?

Navigating the high seas as the female captain of a pirate ship means always being on your guard—especially when one takes a temptingly handsome slave on board.

Captain Joelle Quint believes the slave claiming to be a cartographer can help her decipher the map her father left her when she was a child. She’s spent years trying to unlock its truths, hoping that it holds the answers to a dark family secret.

Sloan Ricker has no intention of remaining captive. When the fiery, red-headed captain offers him his freedom in exchange for solving her map, what begins as an opportunity to escape becomes a struggle to make the beautiful, intriguing Joelle his mistress in more ways than one.

Amidst a battle with the Royal Navy and a first mate’s jealousy, Joelle also fights her growing lust. And as much as he’d like to deny it, Ricker’s desire for Joelle has overcome his initial disdain. To get the answers, independence and love that they both long for, Joelle and Ricker must relinquish control to each other…or die trying.

Gimme a taste, will ya?

“I give you my word, Ricker.” The sincerity in her voice matched that of her eyes. “You help me and freedom will be yours.”

Freedom would be his no matter what. The ragtag band of pirates would not stop him from taking what was his at the first chance he got. Not even the red-headed siren whose knee softly brushed against his, sending an electric wave up his thigh.

He’d never seen a woman quite like Quint. Her abilities as a captain, her feminine artfulness, her sharp intuitiveness—his curiosity in her was eating him alive. Christ! Those lips. Begging to be kissed. He better damn well focus on something else lest he do something foolish.

“Are we ever free?” Do the nightmares ever really cease?

For a fleeting moment, she drifted. What shackles did she bear? Should he care? Nay, he didn’t think so. But he wasn’t entirely sure.

“What is it that haunts you, Captain?”

“I’ve nothing that ails me.” Her chin inched higher. She may have been defiant, but Ricker saw the lie in her eyes.

“Come now. What of this map? You say it leads to answers. Answers to what?”

Profound sadness shadowed her freckled features. “Why he left,” she said, shaking her head.

“My father.” She dragged her fingers into her red tresses at her temple, locks slipping through, and away she wafted once more to someplace far in the past.

“Who am I really? Why did he leave me at the orphanage? Why did he come back years later to deliver the strongbox? What were the emerald and map to mean? Why didn’t he take me with him? I needed him. Missed him. Didn’t he know that? Didn’t he care?” The slender column of her neck tightened as she swallowed. ’Twas painfully obvious she fought back her emotions and tears. “I didn’t even know he came until he was gone.”

Ricker was wrong. He did care. She fought demons just as he. At least his were distinct—people, mostly. He’d overcome his sufferings. Quint’s torments were elusive, like trying to grasp the thick sea fog. She might never put her anguish to rest.

“So, Mr. Ricker,” she said, regaining her flinty battle-ready mask. “Does that satisfy your need to know what haunts me?”

He shifted closer in his chair toward her. “Some wounds need attention.” He gently traced the outer edge of her dressing. “To lessen the pain.”

“’Tis true.” Ricker handed Quint her cup and picked up his own. “To pain,” he said, tilting his mug in a toast.

Her slow drink was like a slow burn of a gun’s corded fuse. The tension was near to igniting. With each passing second, his trousers grew uncomfortably tight. He wanted to kiss her. Had to kiss her. Would kiss her. Now.

The moment he drained his cup, her mouth descended upon him hard and voracious. Ricker recovered from his surprise before she pulled away slightly.

He grabbed her by her nape. No way was he letting her get away with that. He returned the favor, attacking her lips, raiding her mouth, feeding off the warm taste of liquor, the soft roll of her tongue. Damn, she tasted divine. Better than cool water to a dying man.

A rapier on the wall rattled at the slam of the door.

“Get your bloody hands off her!”

Ricker rose to his feet to face Valeryn. The heat of anger flushed up his neck, from both the interruption and the threatening demand. Things were about to get nasty. “What’s your trouble, friend?”

I want my copy NOW!

And anywhere great eBooks are sold.

Now for the games! Click on the links to play.

We’ll start out easy with a pirate-themed words search.

Moving on to something a little tougher, because, hey, your a bad-ass wench/rogue. Try your hand at the Mutiny of the Heart sliding puzzle.

And for those of you who like a real challenge, try the Romancing the Pirate word scramble.

This entry was posted on Monday, June 23rd, 2014 at 8:06 am and is filed under excerpt, Jennifer, News, Uncategorized. You can follow any responses to this entry through the RSS 2.0 feed. You can leave a response, or trackback from your own site.

24 Responses to Mutiny of the Heart Release Party – Romancing the Pirate fun!