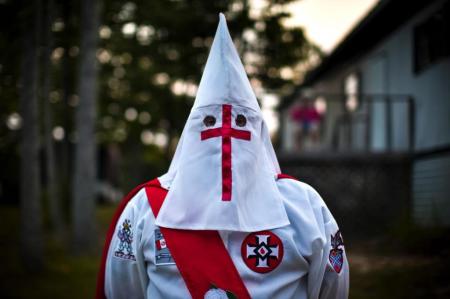 I’m not sure I would classify these facts as “fun”, but they were interesting to learn. Since I grew up overseas, I had a limited knowledge of this group. My research for this blog post has led me to some interesting places with even more interesting people. Unfortunately, this is not just a historical lesson because the KKK is still alive and well in 41 states and has between 5-8000 members. They call themselves the “Invisible Empire” and are still intolerant of many things. Articles I read state that some of the groups shy away from cross burnings and violence these days, but that element is still evident in many of the chapters. Sigh.

While it’s not a happy topic, it may be a great topic to add to a book. These facts could apply to historicals as well as contemporary novels.

– Dan Burros who was a member of both the American Nazi Party and the KKK committed suicide after he learned his Jewish background was made public. A New York Times article lambasted him as a hypocrite since his heritage was not pure and he spouted such hate. The dilemma then was whether to classify it as suicide or a hate crime.

– Timing is everything. In 1957, a college in Alabama had recently integrated and was in the middle of finals week. The KKK set up a cross burning on campus but didn’t take into account all the students would be in the dorms studying. The kids took up bats, golf clubs and whatever else they had on hand as a makeshift weapon and forced the KKK to retreat!

– The KKK hates Westboro Baptist Church. What?? Don’t they have similar hate points? Why yes they do, except for how they feel about the military. On Memorial Day 2011, members of the Westboro church showed up at a military funeral spouting “Thank God for Dead Soldiers” and members of the KKK showed up handing out American flags. Westboro denounced them for having no moral authority because they were racist and the KKK denounced the church group by saying many soldiers had died for their right to protest. Another big sigh.

– KKK members claim that cross burnings are symbols of their “Christian” faith. How did it get started? Believe it, or not, Sir Walter Scott began the tradition with his poem The Lady of the Lake which refers to an old Scottish tradition of burning a cross to call a meeting of the clans. This was most popular in the South probably because there was such a large number of people of Scotch- Irish descent. Sir Walter Scott’s vivid imagery was especially appealing to the novelist Thomas Dixon, who was an avid supporter of the KKK. He added a cross burning scene in his pro-Klan novel, The Clansman, even though that had never been done. In 1905, the novel was turned into the movie, The Birth of a Nation, and it inspired the founder of the second Klan to kick off the 1915 revival with the first cross burning service in KKK history.

– Unity barbecues and some casual gatherings are called Klonvocations.

– Literary figures played into creating a part of the Klan’s history with cross burnings, it also had a hand in humiliating it. Superman often fought villains such as Lex Luther, Brainiac and Doomsday. Did you know he also fought the KKK in a serial called Clan of the Fiery Cross? Instead of the typical bad guys as the enemy of the Man of Steel, this time he battled racism in 1946. The real-life man behind the story infiltrated the KKK and tried to take all he learned to the cops. Either they were too afraid or were a part of the KKK, but nothing was done with his information. So he took it to the producers of the radio show. When the facts of this particular group kept getting played on national radio, the group switched codes etc., but to no avail. They never did figure out how the show knew their secrets!

– We cherish our rights here in America, but those rights extend to people we disagree with as well. The KKK applied, in 1994, to adopt a section of highway in Missouri. The state didn’t want the KKK’s sign on their highways so they turned them down. The KKK sued and won. After the large sign announcing the KKK adopted that stretch of highway went up, the state congress renamed that highway as “Rosa Parks Highway” after the famous civil rights activist. The KKK eventually lost interest in keeping that stretch of road clean and stopped picking up the trash. This allowed the state to take down the sign.

This entry was posted on Friday, April 10th, 2015 at 9:16 am and is filed under Friday Fun Facts, Inspiration, Knowledge, Life, Research, Stacey Purcell. You can follow any responses to this entry through the RSS 2.0 feed. You can leave a response, or trackback from your own site.