The 5th full-length novel in the Romancing the Pirate series sails into stores today. Let’s celebrate with some fun and games! Leave a comment and you could win a copy of the book! 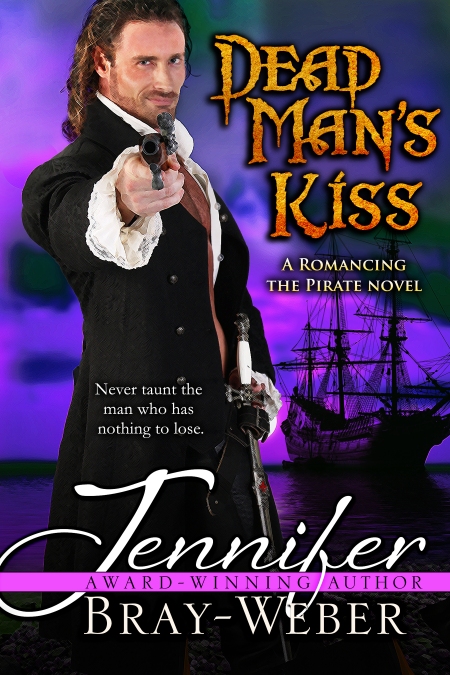 Toe the line, mates. This here’s the blurb.

Forced to make a bargain…

One drunken night in Cuba lands Captain Valeryn Barone in a life or death situation. To escape the gallows, Valeryn must agree to a bargain only a fool would make: Escort the tempting and tenacious niece of his captor across the Caribbean or lose his ship, his crew and his life! The caveat? The beautiful Spanish woman must remain untouched for the entire voyage.

Determined to get what she wants…

Catalina Montoya will stop at nothing to get what she wants—even when trouble is certain. Sent to live with her uncle after a scandalous affair, Catalina intends to concentrate on her dream to become a renowned naturalist. She never expected her uncle would send her with a notorious pirate to further her studies. Worse, she never expected to want the devilishly handsome pirate more than anything else.

It’s a battle of wills…

Now Catalina only has 8 weeks to seduce Valeryn and collect her specimens before he returns her to her uncle. And Valeryn has 8 weeks to secure his redemption. Except neither would be that lucky. Not when ruthless enemies threaten to destroy them at every turn. Can Valeryn save those that foolishly depend on him? Can he resist Catalina’s heart? Does a dead man walking even have a chance?

Anchors aweigh! An excerpt for ya.

Henri’s stern command only fueled Valeryn Barone’s belligerent temper. Hell no would he stand down. And the crusty old sea cook could do nothing about it.

Staring into the dark, fiery eyes of a bastard who said the right thing at the right time, Valeryn itched for a fine bloody fight. Craved it. After the morning he’d had, the heartbreaking news he’d delivered, he was beyond confrontational.

He cracked his knuckles thinking of Magdalena, the pain sweeping across her features as he handed her the ring belonging to her murdered husband. She had collapsed into his arms sobbing, and he couldn’t keep his own emotions from bubbling over. Gabriel Kipp was a damn good seaman, pirate, and friend.

Ever since leaving her house, Valeryn had been soaking in the finest rum this rat-infested port had to offer. Now he was ready to release his pent up aggression. Nose to nose with a local Spaniard who was clearly taller and less drunk, Valeryn smirked.

Conversations in the smoky tavern died. The wench sitting on a nearby jack’s lap stood and scooted away, the fellow cleared the table and followed behind. Dust swirled in the sinking western sunlight as the door opened and patrons smartly left.

“Take ’im down, Diego!” A rotund bloke with an absurdly thin mustache encouraged the cur.

Diego didn’t unlock his steady glare. Valeryn didn’t miss the flash of challenge in his muddy eyes. “Aye, take me down, Diego.”

“I thought the captain of the infamous Rissa would have more control of himself.”

So the blackguard knew him. Not surprising. He did have a nasty reputation. Everyone who sailed the pirate ship Rissa did.

“Weren’t you the first mate of that woman? Capt’n Quint, is it?” the fat squab mocked. “Imagine that, a pullet orderin’ ya ’round.”

The tip of Diego’s lip quivered up. “That he is, Bartholomew.”

“I heard ya ran the ship aground on the shoals,” Bartholomew continued. “Ain’t much of a man or a capt’n, are ya, boy?”

The sarcasm dripped sharp and acidic from Diego’s words. It was the flash in the pan Valeryn needed. He exploded, giving in to Diego’s taunts, with a well-placed fist into the bugger’s nose.

Diego stumbled back. Valeryn struck him again, the white hot fury blinding him, feeling the need to bleed.

The Spaniard charged and slammed him into a table. The wood scraped across the dirty floor and bit into Valeryn’s back. Pain shot through his ribs, once, twice, until he shouldered Diego’s strikes and rolled off the table, grabbing a mug as he righted himself. He tossed the mug’s swill into the arsehole’s face. A heady scent of rum mingled with sweat and tobacco. Diego sputtered, swiped his profile. Valeryn tightened his grip on the metal cup, smashing it into Diego’s jaw.

Diego roared, planting his fist into Valeryn’s eye with so much force, Valeryn spun. He struggled to maintain his balance. But he failed and hit the floor on all fours. Before he could scramble up, Diego kicked him in his ribs. His breath seized in his lungs, unable to draw even the faintest of breath, he crumbled to the floorboards. Diego grabbed him up by his collar and pummeled Valeryn, rattling his brains. The smarting was fleeting as his rage flared. Like hell was he going to let the bastard best him.

He came at Diego with the ferocity of a wild beast. Blow for blow, Valeryn traded with the miscreant. Blood stung his eyes, seeped into his mouth, the metallic tang coating his lips. Somewhere over the cheers crowding his ears, he heard Henri demanding he stop his nonsense.

Why stop? The pain reminded him he was alive. Reminded him Kipp was not. That, alone, kept him going. No stopping until death.

Plunder and Pillage for your copy at these fine retailers and anywhere awesome books are sold online!

Raise a mug to the pirate’s life. Some fun for ya.

Let’s go a-roguing with a couple of online pirate games.

Easy (as in for little macks)

Medium (for those who can hold their own)

Learn to sail…sort of. Sailing simulator!

What kind of pirate are you?

I was tagged as Captain Tessa Rose. “Captain Tessa Rose is a name that matches with the adventurous personality. You usually show no quarter if betrayed by a friend and have a short temper. You can be sweet when you want but might just blow a fuse. You take many risks and don’t care about never making it back.” I like the sound of that. What’s your pirate name?

Leave a comment and you could win of a copy of DEAD MAN’S KISS. One winner will be randomly chosen. Thanks for celebrating release day with me!

This entry was posted on Thursday, October 1st, 2015 at 2:43 am and is filed under excerpt, Jennifer, News. You can follow any responses to this entry through the RSS 2.0 feed. You can leave a response, or trackback from your own site.