Huzzah! Today is the day. Pirates and Highlanders everywhere are rejoicing! It’s release day for The Laird’s Reckoning. Just in time for summer reading. Join the crew and grab your copy at Amazon, mates. 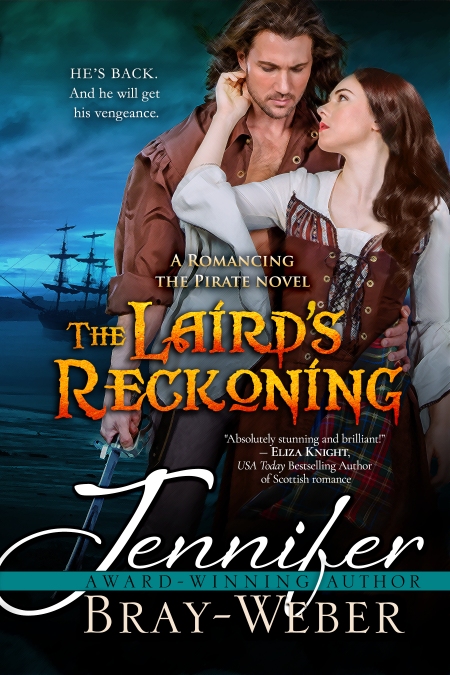 Birk Bane was born the second son, the unwanted son, the unneeded son. Crossed by family and falsely accused of a crime, he flees Scotland to the sea where he’s recruited by a pirate. Five years later, he’s captain of his own ship and embraces his new life, though an ache for the woman he left behind remains. When he receives word of his father’s death and his clan is floundering, Birk begrudgingly returns home. Little does he know there’s more he left behind than a title…much more.

Sheena MacRae helped Birk escape to safety years ago, always expecting he’d return. Time passes and she believes him to be dead. With her clan being terrorized and slaughtered, she accepts she is the only one who can stop the suffering by agreeing to marry Laird Gordon, the man behind the assaults. The man who is also poised to rule Birk’s clan. Despite the crushing need to hold Birk in her arms once more, his reappearance changes nothing. Sheena has too much to lose if she reneges the betrothal to Gordon. And while Birk’s intentions are to return to the sea after reclaiming his clan, she didn’t count on her pirate lover’s plan for revenge…

The longer he’s home, the more betrayal Birk uncovers. There will be a fiery battle ahead for Birk and his brethren. If he survives, how will he choose between the life he loves and the love of his life?

The panic in Sheena’s eyes matched Birk’s racing heart. Their breaths stirred the dust they had kicked up crouching behind the crates. Shouts carried down the alleys, drawing closer.

Sheena gripped his arms. “Go!” Her pleading command rushed out in a hoarse whisper. “Run, before they catch you.”

“Come with me.” It was a desperate attempt to keep Sheena by his side, a selfish one. But he was no fool. If the magistrate found out she helped him escape, his bonny lass would be imprisoned. He couldn’t protect her if he left her behind.

She shook her head, mahogany tresses slipping free from the knot at her crown. “I canna leave my father and Mallabroch Manor.” Gruff voices neared. Her eyes widened, begged. “Please, Birk. If ye are hanged, I’ll kill myself, I swear I will.”

He believed it. By the heavens, he loved his lass. Loved her more than anything this world had to offer. He’d give his life for her. But never would he allow her to give hers for him. Never. “I canna leave you.” He could hardly swallow, the lump of fear wedged tight in his throat. She was his air, the beat of his heart. He was terrified to be without her. Terrified and angry. Angry for the pain marring her beautiful effervescent smile. He swore whoever set him up, accused him of being a false coiner, would pay and pay dearly.

“Ye must go.” She grabbed his face with both hands. “Ye must. For me.”

The tears cresting in those moss green eyes, the tremble in her bottom lip, tore at his soul. What choice did he have? Sheena would not leave her father, her home. This he knew. Her love and loyalty for her da was fierce. Could he really expect her to leave Ramsay, the laird of Mallabroch, alone, as ill as he was? Would he be able to protect her any better on the lam? No. He had no choice. She was a mighty one. She’d be fine, if only he’d let her go. Let her go and run. Damn it, he never ran from anything. He tucked a wayward lock behind her ear. “For you,” he repeated.

A shaky smile accompanied her gusty breath of relief. “I love you, Birk.”

“And I you. More than the moon and stars.” He pressed a kiss to her mouth. “I will clear my name,” he vowed against her lips. “I will come back for you.”

Birk gripped the back of her neck and she deepened the kiss. For a moment, he lost himself with her. The accusations, the magistrate’s guard closing in, his damaged, jaded world faded into the light, musky, floral scent of heather and urgent caress of her lips.

“This way!” The strident shout broke the haze, yanking him back to the present.

“Promise me.” She choked on the words.

Footfalls pounded against the packed dirt.

He could take no more of her agony. Aye. He would see the man who framed him dead. “I promise, mo teine, my fire. I will return for you.”

Tears streamed down her creamy, flushed cheeks. She nodded once. Without a word, she spun to stand, ready to face the men chasing after him.

Birk took off at a run, dodging barrels and crates, cutting around the buildings on the leading edge the rest of the way through the town to the docks. Behind him, he heard her shrill scream. He pushed hard against the urge to hasten back to her. He had to believe she would be all right. She was a hellcat when provoked. Sheena would be fine. She had to be.

He jumped over a pile of ropes and looped through stacks of lumber. The stench of timber and pitch mixed with brine. Off to the left, a carpenter hammered, the thudding so familiar. Ahead, several stevedores unloaded cargo from a ship. Birk hadn’t thought beyond fleeing the cell which Sheena unlocked. He hadn’t thought to where he’d go. But Sheena had. He was to flee to the only place he’d known—his father’s shipyard. Now as he skidded to a stop in the middle of the yard, realization struck. He had trapped himself between the town and the men coming for him and the sea. Bloody hell. Aye, there was a boat waiting for him somewhere, but would he reach it in time?

Sheena’s plan. Take a skiff across the Sound of Sleat to the mainland. Find a horse in Mallabroch and disappear. It was his only option, though he would rather have her by his side. Running from all the injustices their young lives had suffered, together.

Birk slunk through the maze of planks, boxes, casks, and tools, weaving through the scaffolding beneath the hull of a brigantine. He set his sights to the end of the docks where fishermen cast out in their skiffs. Just as he cleared the last support beam, he came face to face with his father.

Bewilderment flashed across his haggard face but was soon replaced with a flare of venom.

Birk slid his gaze past his father to his cousin rounding the other side of the scaffolding and coming up short. Cam slowly took a step back, as if he hoped not to become entangled in a confrontation.

“Birk.” A sneer crooked his father’s mouth. “Let ye out, did they?” His tone belied he knew the better.

Shouts traveled through the shipyard. His pursuers were nearly upon him.

“Hmph.” The old man lifted his chin and sneered down his nose. “Suppose not.”

“I didna do it, Father.” Speaking truths, hell, speaking at all was lost on the man.

Since birth, Hugh Bane, laird of Creaganbroch Manor, the village of Tradale, and the surrounding lands, had shunned his youngest son—the weak, sickly child who wasn’t expected to live. But his mother refused to accept her little bairn could not grow happy and healthy. Through her love and nurturing, never leaving his side, Birk survived the infant months to become the favorite of her three sons. That didn’t change as he grew a few years older. Hugh had become resentful, claiming his wife mollycoddled Birk. He’d force Birk into harsh labor around the yard, harsher than he should have for a boy his age. This but angered his mother and many fights were waged over Birk. Until his mother fell ill with fever. Upon her final breaths, it wasn’t Hugh she called for, but Birk. And Birk had suffered for it ever since.

Except that he didn’t. He hadn’t let the old man get the better of him. Not after the last time he took a backhand across his face at the age of fifteen.

“Didna do it?” Hugh spat. “’Tis your fault I’ve buried James. Ye and your goddamned defiance.”

And there it was. The blame he’d been burdened with and the guilt that his father was right this time. But that was his cross to bear and he’d be damned to let the old man lay one more thing at his feet. He’d be damned to give him any such satisfaction.

A wicked grin crooked one side of Cam’s mouth. One day, Birk would bloody up that idiot’s face, the toady.

“Ye did, and ye sullied the Bane name with your thievery.” Hugh, quick as a viper, snatched Birk’s arm. “Cam.”

His father’s expression hardened. “Alert the authorities in the yard,” he leaned within an inch of Birk’s face, his eyes darkened with hate, “we have the bastard here.”

Birk had never gotten along with his cousin, but something about the toothy grin splitting Cam’s face didn’t set right with him. ’Twas more than Birk facing certain death at the end of a rope. ’Twas something…triumphant. Cam spun on his heel toward the approaching men.

Birk wrenched his arm free and leaned in even further, a hair’s breadth from the man. “Ye first.”

If ye haven’t signed up FOR MY NEWSLETTER for sneak peeks, excerpts, and giveaways, what are you waiting for? All new subscribers will have a chance to win a signed print copy of The Laird’s Reckoning!

This entry was posted on Tuesday, May 30th, 2017 at 4:36 am and is filed under Jennifer, News. You can follow any responses to this entry through the RSS 2.0 feed. You can leave a response, or trackback from your own site.