Ahoy, mates! For the past 23 years, September 19th marks International Talk Like A Pirate Day! Yes, there is such a thing. Read how it all started HERE.

How do you celebrate ITLAPD? Well, you can dress, talk, and act like a pirate, of course. Turns out there are boatloads of ways to get yer pirate on. Order around the scurvy landlubbers at work with the business end of yer cutlass. Drink rum at lunch declarin’ it’s a pirate life for you. Hang out the driver’s window of yer vehicle hollerin’ “move yer aft end!” You can even change your Facebook language to English Pirate (just go to your settings to easily make the switch). Aye, me hearties, there’s tomfoolery to be had.

And to help commemorate such a fine day, below is an excerpt to my latest pirate adventure The Righteous Side of Wicked, a Pirates of Britannia and Romancing the Pirate novel coming this December.

“The devil is afoot.”

Coire might have laughed at the irony in Mr. Shaw’s remark had he not felt the same slick unease slithering up his spine.

Minutes ago, they had weighed anchor and slipped into the night on a hushed breeze, his ship’s belly full of contraband. That they were smuggling gunpowder and firearms hadn’t mattered. Coire and his crew had done countless nefarious deeds, commissioned by landowners, powerful men, and scheming governments. ’Twas what they were good at, a prosperous pirate’s life. But tonight, something was…different. Before the sun tucked under the blueing horizon as the men loaded the last of the hogsheads and smaller barrels, he had noticed the change in the wind. He couldn’t put a finger on it, but the foreboding was there, clinging like thick soot. Even now, the dark waves glittering from the light of the full moon were subdued despite the swift currents. Hardly a sound could be heard save the creak of Kelpie’s hull, a twist in her braces, or whisper of her shrouds. Or so it seemed.

“Best we not get in his way, then, eh, Mr. Shaw? He might find us worthy adversaries to engage.”

The haggard old sea dog’s bushy, graying brows rose as he slowly nodded in amused agreement. “That he may, capt’n. And a grand affair we’d give ’im.” Mr. Shaw cast one last weathered eye out to the darkness before leaving Coire at the railing. He recognized the look in his first mate’s gaze. ’Twas one of longing for warmer climates and friendlier ports. Or maybe Coire directed his own wish upon his interpretation. He wanted to return to the West Indies, resume his privateering ways. And he vowed he would do so…soon.

An unseasonal, low, wispy fog clung to the coastline. Up ahead, Coire could just make out the obscure outline of Peel Castle, the garrisoned administrative center, church, and prison of the west side of the island. Torchlight dotting the castle provided a guide to the open sea and the North Channel beyond.

It had been brazen coming to Man under the nose of the British for more gunpowder to add to their haul. Brazen, but necessary. He and his men would be paid a hefty sum to get the arms and ammunition to Scarba and into the hands of Jacobite rebels. And they had to do so ahead of planned attacks on key locations. Pockets heavy and lined with gold while aiding in the war against the British succession suited Coire just fine. Though he no longer claimed family there, or allegiance for that matter, Scotland was the home of his blood. She and her people deserved better than to be subjected to the whims of an English parliament and her abusive militias. But ’twasn’t his fight.

Kelpie passed the tidal island which the Peel Castle perched upon. More torchlight winked along the battlements. Odd so many lights would be burning at this late hour. A dark silhouette bobbed in the water between the ship and the shore. Was that…a skiff? As soon as he questioned his eyes his topman straddling a cross tree in the mast above him confirmed it. 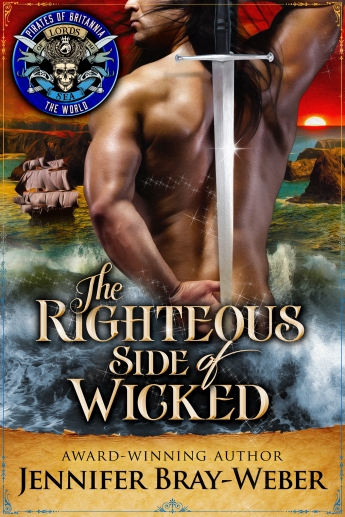 As the skiff neared, Coire grasped the rail and squinted hard, willing the thin gossamer veil of fog away. What kind of fool would be out in a tiny boat in the middle of the night?

Aw, hell. His imagination must have been running rampant. Was that a…? Could it be?

Mr. Shaw was once again by his side, along with Jonesy, Redd, and a few other crewmen, all wearing confused expressions.

“Do me deadlights deceive me? Is that a…woman?”

“’Twould appear so, Mr. Shaw.” Indeed, by the figure’s slight frame and long tendrils of hair lifting on the tender breeze, ’twas a female manning the oars.

That sinister unease lingering on the fringes of his conscious all evening suddenly pressed down upon him. Whatever this woman was about, whatever reason for her to be out in a rowboat in the middle of the night, it couldn’t be good.

The lass waved valiantly between pulls of the oars while trying to intercept the ship. Coire ordered the sails reefed before they rammed into her and a line thrown. ’Twasn’t long and the girl had a grip on the rope.

“Hello, there.” The woman’s words rushed out in her shortness of breath, yet she smiled. “A fine evening to ya. Permission to come aboard?”

“What are ye doing out here?” In no way was Coire going to blindly invite someone on board whilst he carried sensitive goods, especially a crazy lass paddling out to sea at midnight.

“Ah, well, ’tis a bit embarrassing, see. I was to rendezvous with a, um, friend on the bank. She swiped her shirtsleeve across her brow. Though the night air was cool, she’d be sweaty from the exertion. “I fell asleep waiting and the tide must have come in.”

A tryst, eh? She’d willingly admit to it? Coire wasna so quick to believe her story.

“Why is it then, lass, ye are rowing away from the shore instead of to it?”

“Please, sir. ’Tis a long way back and my arms are tired.” She glanced back toward the craggy shoreline and castle losing its shape in the thickening fog.

“Rescue? The lady is hardly in distress.”  Not when he had caught a glimpse of two pistols shoved beneath her waistband. In fact, he was beginning to believe she intentionally set out to board his ship.

“This is not a vessel ye wish to board, lass. That be a veritable truth. I advise ye to return from which ye came before yer journey back becomes overly taxing.”

Mr. Shaw’s jaws flapped, wrestling with the moral obligation of plucking the lass from the water and the problem she would pose if they did. “This ain’t right.”

“On many levels, I’m afraid,” Coire agreed. “We canna fish her out and go back to the wharf. ’Tis too dangerous and we must stay on schedule. We canna put the mission at risk.”

The woman’s grin was gone, replaced by a bothered moue. She flung another glance to the island. “There are sharks in these waters.”

“And ye are in a boat,” Coire pointed out.

“Ye’ve a sturdy craft.” Persistent little fluff. “Let go of the rope or I shall cut it.” Coire drew his dirk and gripped the cord.

“But my boat is sinking.”

She tugged out a pistol, pointed it at the hull, and fired a shot. Bits of timber exploded. A puff of smoke and the echo of the blast snagged upon the breeze. Water flooded through the resulting hole.

“My boat is sinking.” Her calmness was unsettling as she tossed the spent pistol to the floorboards.

The lass had an unflinching composure given the speed her vessel took on water. And that she, herself, went to such lengths to board his ship was enough to set warning bells clanging loud between his ears.

He damned near growled at the sight of the girl standing ankle deep in the faltering skiff patiently waiting for the rope ladder. Her dangerous stunt reinforced why Coire did not trust women. They twisted and crooked circumstances to fit their fancy. Manipulating anyone to get what they wanted, even young impressionable men. Most especially young impressionable men.

If ye haven’t signed up FOR MY NEWSLETTER for sneak peeks, excerpts, and giveaways, what are you waiting for? Escape into a world full of adventure, rum, fearless pirates, spirited wenches, and swoon-worthy, steamy romance with the Romancing the Pirate series.

This entry was posted on Wednesday, September 19th, 2018 at 4:30 am and is filed under Jennifer, News, Uncategorized. You can follow any responses to this entry through the RSS 2.0 feed. You can leave a response, or trackback from your own site.